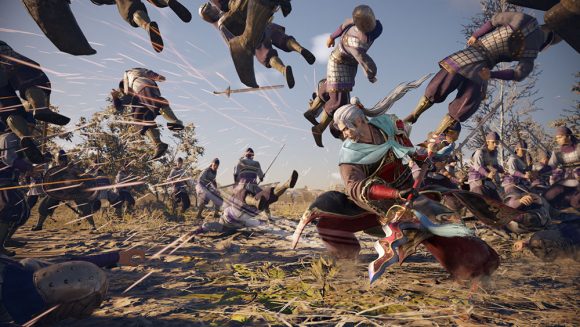 Guo Jia, who also debuted in DW7XL, is Cao Cao’s famous strategist who unfortunately died young soon after the latter won against Yuan Shao in the Battle of Guandu. In this game, he shares the same Staff as Zhou Yu, although his attacks are more ice-based when compared to the latter’s fire-based moveset.

Sun Ce is the eldest son of Sun Jian who would continue his legacy and be known as the Little Conqueror, as he conquered the lands of Wu as a foundation for the future kingdom of Wu. Unfortunately, he loses his iconic Tonfa in this game and instead now wields Mowing Blade, sharing it with Zhou Cang.

Next up we have Sun Ce’s brother Sun Quan, who would later rise up to be Wu’s first emperor. He retains the Blaze Sword assigned to him in Dynasty Warriors 8 Empires, and in this game, you can see him alternating between normal and reverse grip in his attacks.

Then we also have Zhang Fei, the brute sworn brother of Liu Bei and Guan Yu. Although he still has his iconic Viper Spear, Famitsu generalizes his weapon type to just Spear, and it seems like parts of his basic moveset (that are not character-exclusive moves) are also shared with Zhao Yun.

Guan Suo is the third son of Guan Yu who, although fictional, is very famous in Chinese folklore and opera shows. He goes back to using the Nunchaku from his debut in Dynasty Warriors 7, but he barely uses it in his exclusive and Musou attacks as he mostly uses his legs instead, which was one of the factors why he was assigned the Sabatons in Dynasty Warriors 8 Empires.

And last but not least we have Diaochan, one of China’s Four Great Beauties who played a big role in the confrontation between Lu Bu and Dong Zhuo. She retains the Whip which has been assigned to her since Dynasty Warriors 6.